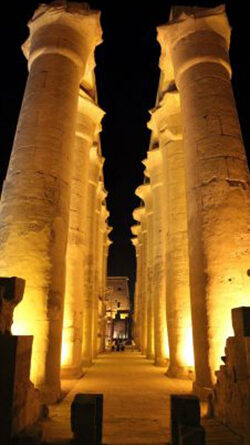 With this name the Egyptians called Thebes

Waset, it was so-called by the Egyptians. the famous capital of the pharaohs of the Middle and of the New Reign, known all over the world with the Greek name “Thebes”, was actually a real metropolis, full of life and activity.

To go back over the pharaohs’ steps of the XVIII and XIX dynasty, today, we must go to Luxor, where the southern Opet of god Amon is.
Only a few ruins remain of Waset, although part of the ruins of the temples in Karnak and in Luxor express at the best the greatness of the ancient Egyptian capital.

Waset was on a vast territory divided in three main areas

The first one represented the city itself where the pharaohs and the people lived and to which was connected a sacred area in a northern suburb, which was dedicated exclusively to the gods. During the XII dynasty a temple dedicated to god Amon was built, the first nucleus of the temple of Karnak. The god’s southern Opet, the Opet-resut, where Amon went to visit his bride (the temple of Karnak of today), was built only in the XVIII Dynasty and it represented the Harem of the South. In the third part of Waset on the left bank of the Nile, today named Western Thebe, there were the funeral temples and the royal and private necropolises.

The citizens of Waset lived very closely to the dead, protected by the gods who would guarantee them the same daily life even after their life on earth. Waset had been chosen by the gods for a glorious destiny. It was strategically built in a crucial point of the empire, it was favored in the commercial relations with the countries of the Mediterranean and of Africa, particularly with Nubia, and it could count upon the nearness with the roads towards the desert and the oasis. Waset was luxuriant, thriving, it was on one of the largest and most fertile planes in Egypt. The Nile guaranteed the fertility of the land, and the harvests were abundant. The Theban mountain that surrounded it and the desert valleys constituted the life after death thanks to the construction of the royal and private necropolises.

It was called by the Egyptians “Amon’s city” and was re-named by the Greek “Diaspolis Magna” (“The great city of Zeus”, god with whom Amon was identified). It isn’t clear why in the following epoch it was named Thebes. According to a hypothesis it could derive from the name Apet or Opet with which Amon’s domain was indicated, to which the female article “T” was added and for the Copts it was “T-Apet” and for the Greek “Thebes”.

Another hypothesis makes the name go back to the site of Medinet Habu (Western Thebes), Iattjamet, which was shortened in Djeme for the Greek it would become Thebes (Thebai). The beautiful Waset where the greatest pharaohs of the whole history of Ancient Egypt lived, was initially a small village of fishermen. Infact, the first capital of the land of the Nile was the city founded by Menes: Memphis “The well-built and beautiful one”. But it was in the fate of Waset to become one day the centre of the power.

It was capital of the fourth nomo of Upper Egypt during the XI dynasty with the downfall of Memphis and the anarchic chaos that followed, at the end of the First Intermediate Period, some Theban princes, among whom Antef and Mentuhotep, restored the monarchy, governing from Thebes.

When the Hyksos occupied Egypt they settled in a new city on the Delta, electing it “Avaris” (today Tell el Daba)

Ta’o, Kamose and Ahmose, with other heroic Theban princes, at the end of the Second Intermediate Period, released Egypt from the invader and thanks to this victory, Waset (city from which the princes came) became the capital of the Egyptian empire. During the XVIII dynasty the city had a great period of splendour and power. It was decorated with beautiful monuments, temples and royal palaces of an impressive beauty, and celebrated with many magnificent celebrations of which the echo spread over all the land of Egypt.

Ascended to the throne, Akhenaten wanted to abandon the city for a new capital, Akhetaton, which was built purposely to worship god Aton. With the XIX dynasty the political centre moved from Thebes toward North, although this didn’t touch the holiness of the city that remained the religious capital of the empire. Ramses II built a new capital, Pi-Ramses on the Delta, on the site of Avaris, anyway both the pharaohs of the XIX dynasty and those of the XX continued to be buried in the Theban necropolis.

Between the XXI and the XXII dynasty, during the tanita epoch, the greatness was recognized to Thebes, thanks to Amon’s temple and to the influence of the clergy which was, with the great priest, the opposing party of the pharaonic power in Upper Egypt. With the advent of the black pharaohs, during the XXV dynasty, who from ancient kush advanced toward north, Thebes was again the glorious city it had once been, but not only for the period of the Nubian domination. The splendour of the “sceptre of Egypt” was shadowed completely before the assire army in 663 BC.

Omero in the Iliade recalls its power:
“Egyptian Thebes, where endless riches are in the homes, Thebes which has one-hundred doors, and through each one two-hundred armed pass, with carts and horses”.