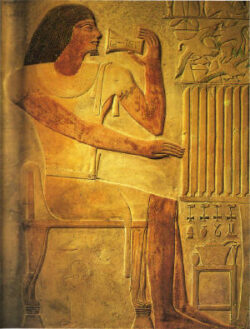 The title of visir (in Egyptian tjaty) was instituited under Snefru and the first one who used it was Nefermaat.

But the function goes back to a much older time and was already performed by Imohtep under the pharaoh Djoser (the title tjaty was put before his name in the texts only in the successive epoch).

The visir was at the head of the Egyptian functionaries and of the central administration.

As the internal minister, he had relations with the nomarchs, he controlled the division of the land and the administration of the “corporations” of the professions, he supervised the police, recruited the troops.

His orders were carried by the messengers (uput) who often worked for him and controlled the administration deeply in the provinces. As minister of Justice, he presided over the supreme court and various Cabinets of the functionaries. As director of Finance, the chief of the Seal went to him every morning to tell him about the management of the treasure and the texes received. So the visir’s responsibilities were great and his protocol was vast and various.

To become a visir it was necessary to be a scribe “a wise among the wise”.

In the ancient reign only the sovereign’s sons or nephews could become a visir, but during the Teban Empire the possibility to candidate oneself was given also to the functionaries who had demonstrated to be particularly shilled and who had went up the hierarchical ladder rapidly thank to their own qualities.

In the new reign there sometimes were two visir, one for Lower Egypt and the other for upper Egypt

From the many tombs of visirs of the new reign, we can get an idea of how these functionaries were rich and powerful, but from the text engraved in Rekmara’s tomb, Thutmosi’s III visir, we also understand how tiring and hard his day was keeping himself always in justness.