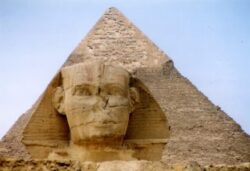 Sphinx in Giza has a human head and the body of a lion.

The fusion of the two elements, zoomorfo and human, in a sculpture of colossal sizes is still obscure and not even a document exists about its religious meaning.

Maybe, in its appearance of a curled up lion, it had to guard the funeral complex of the pyramids, but there have been other interpretations about its function and some doubts about its dating.

Was it really a monument wanted by Chefren, of whom traditionally are attributed the features of his face?

Is it an interpretation of god Harakty (Horo at the horizon) as they decided, a thousand years after its construction, the “archaeologists” of the time?

When was the Sphinx built?

Are the head and body of the same epoch?

Basing upon the deterioration of the body, some experts have attributed to the Sphinx 8000 years more than the “declared” ones:

the erosion of the statue didn’t depend on the wind or the sand storms, but from the rainwater that has invested the millennial colossal during the post-glacial period, from 10500 BC

Chefren was only the restorer of the monument to which, with the opportunity, he gave his face.

This date 10500 BC puts back the hands of history and to suggest the existence of a civilization evolved many millenniums before the Egyptian one is favored by other researchers who from 1979 have opened an endless dispute with the Egyptian authorities about the mysteries of the Sphinx.

If it really was built in that far date, why was it wanted exactly in Giza?

The answer is in the sky.

The sphinx has the same shape of the constellation of the Lion: it’s enough to see any astronomy manual to notice it.

All this, naturally, doesn’t demonstrate in a scientific way that the Sphinx was built 8000 years before what the tradition states, but for some it’s an hypothesis as valid as the one that attributes the work to Chefren.

For what reason he positioned it eastward, giving it the shape of a constellation that the Sphinx hadn’t “seen” any more for centuries?

Seen with the eyes of the stars, the Sphinx appears as a millennial watch the hands of which indicate a mysterious epoch: that 10500 BC that obsessively returns in the study of the pyramids.