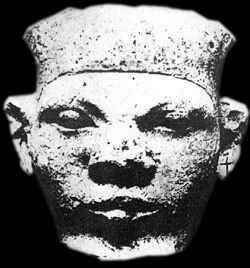 All the sources of Egyptian history declare unanimously that Menes was the first Pharaoh. A virtual confirmation is given by the famous “Palermo Stone”.

The superior register gives only the names, under a quite fanciful way, of kings on whom the analyst is not able to give more information. The second register would certainly have begun with Menes, but the part concerning him was lost; in analogy with the other two kings of the I dynasty mentioned in the big fragment in Cairo, it’s believed with almost complete certainty that there were both his name of Horo as well as his own name, maybe with that of his mother’s.

Under the heading the place reserved to the dating remembered with no doubt the most important events for each year of his reign, even if it’s possible that the compiler, considering it was an epoch so remote, must have used his own imagination.

It would be interesting to know if it was mentioned in an explicit way the unification of the Two Countries that was for the  Egyptians the memorable event from which the human history began.
A hint to this event is in the expression Union between High and Low Egypt; the round of walls that mark the first year of reign for each sovereign in the “Pietra” in Palermo and other, documents, and that evidently  refer to the ceremony with which the sovereign’s descent from the founder of the dynasty was legitimized.

The mentioned walls should be those in Memphis , of which the foundation is attributed to Menes by Erodoto and, with some confusion, also by Diodoro Siculo. The “Stele di Rosetta”, talking about Memphis, talks about the rituals usually performed by the king when taking up his high role.

The moving of the royal residence from an unknown place in the South to this city with a beautiful natural position at the peak of the delta must be so considered a direct consequence of the establishment of the double reign.
The other important acts attributed to Menes by Erodoto regard the creation of an embankment that had to protect Memphis from the floods of the Nile and the building of the temple in Ptah, south of the bastions of the city; this last event has an implicit confirmation from a tablet from the XIX Dynasty that mentions  Ptah by Menes.

As you can well imagine, considering the lack of historic finds and the defective knowledge of the hieroglyphics of that period, the identification of a king of the I Dynasty is never accurate and certain.
That’s how then Menes is identified with Narmer by some historians, while for others he and Aha are the same person.

By others, Narmer, Menes and Aha were three different persons.