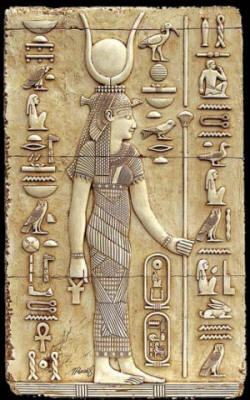 Osiris’s bride and sister. To her goes the institution of the family and the teaching to the women of the weaving and of the embroidering.

But fate had a surprise for them. Their evil brother Seth, jealous of their success had plooted a deceit against his brother Osiris.

He had prepared a rich casket, promising to donate it to anyone who, going inside it, would have filled it completely with his body. The casket had Osiris’s exact measurement.

Osiris fell in the trick and went in the trap-casket prepared for him. Immediately Seth and his accomplices closed the cover and threw it in the Nile.

During one of her journeys she learned that the casket had been transported by the stream from the Nile to the sea. Here, as it reached Biblo, it was stranded near a bush. The bush, as for an incantation, was transformed into a beautiful acacia.

Holding the casket in its trunk.

The king of Biblo had seen the tree and had ordered to cut it, making a column of it for his palace. Isis, who had reached Biblo, every night transformed herself in a swallow and flying around the column screamed desperately but nobody took notice of her.

Afterwards, when she was the king’s little boy’s governess, she was able to have the casket as a gift. Once opened, she tried to give life back to her husband, but in vain.

This is the moment she was fecundated by Osiris, when, as a hawk, she gave wind with her wings on her lifeless husband’s body.

So she hid the coffin in Buto, a marshy place. But the evil Seth, while he was hunting, found his brother’s coffin and tore his body in fourteen pieces which he scattered. So Isis’s search for her husband’s pieces began.

They were all found, except for the male sexual organ, eaten by the ossirinco of the Nile. In each city where Osiris’s pieces were found, a temple was built.

When Osiris’s body was recomposed, it was tried to give him life back.

The attempt was only partly successful because Osiris began to reign again but no longer on earth, but on the “Site beyond the west”, the afterlife.