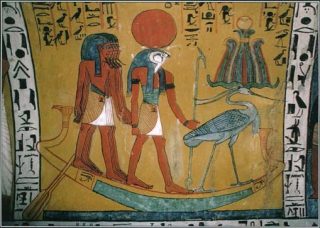 Ra, deification of the visible sun, he was worshipped in various places in Egypt before the theology in Eliopolis took possession of him.

The first aspect of the myth, is the God who on his diurnal boat crosses the sky in the day, and in the night went on his nocturne boat to go across the inferior world in the same way.

To conciliate his existence with other two solar divinities, the scarabs Khepri and Atum.

He was Khepri in the morning as a child (but mostly as a scarabs), at noon he was Ra triumphant as an adult, and in the evening he was Atum, the setting sun, as an old man.

Even in this case, it was a croos-reference to the myth of Ra’s reign of the earth

A creator God and father of the Ennead, Ra reigned on earth among men and gods.

During his reign, he knew about human events and got old and in that moment, taking advantage of his weakness, men revolted against him and he had to defend himself sending his eye (Hathor and Sekmet) to punish them.

EVEN ISIS TOOK ADVANTAGE OF HIS OLD AGE TO STEAL HIS MAGIC POWER.

Tired, Ra went up to the sky on Nut’s back.

With no doubt, it’s this reign on earth at the beginning of time that justified the appellative “Ra’s son” (Sa Re), that the pharaohs will take up, starting from Chefren, and that will follow their name, the fifth in the title.

During all the Egyptian history, Ra will be a kind of superior, enlightening the pantheon; the great gods will be Amon-Ra, Mont-Ra, Khnum-Ra, Sobek-Ra.

In his solar destiny, the king reaches Ra in the sky and he, first the master of the other world, that he crosses in his nocturne journey, will find its completeness in Osiris, who was his enemy.