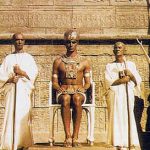 The ceremony for the Pharaoh’s consecration, long and laborious in the New Reign, forsaw a ceremonial phase in which the pharaoh seized a staff that in the lower part, was bigger and sculptured, had a symbolic image of the Evil, that the sovereign “had to drag in the dust”.

The complicated ceremony mentioned was divided in five phases, that required various days of rituals.

First phase:
The Prince’s/Pharaoh’s purification with the unction of magic and perfumed noble ointments.
Second phase:
The nurturing (sometimes represented in the scenes found on the temple walls) by a female divinity, that means that the Prince had a divine descent.
Third Phase:
The clothing and the imposition of the crowns of Lower and Upper Egypt.
Fourth Phase:
the attribution to the Pharaoh of five ritual names, with which he would be called in various circumstances during his whole reign.

In the great Pharaonic temple dedicated to Amon-Ra, in the sacred enclosure of Karnak (Tebe) this tiring ceremony was repeated in the places from the sanctuary to the ipostila chamber and to the sacred lake from which each year began the propitiatory and rejoicing ceremonies for the arrival of the flood, saver and fertilizing of the Nile.