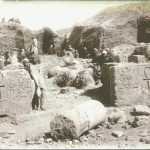 Bubastis (in the region of the delta, near Zagazig of today) was the capital of the XVIII nomos of the delta.

Its Egyptian name “Per Bast” means “Bastis home” and comes from the name of the divinity that protected it, Bastet.

His sanctuary already existed in the Ancient Reign, in Khufu’s and Chefren’s period. Later Pepy I ordered to build a chapel, in the temple there are also finds from the following epochs and particularly from Ramesse’s II epoch, Ramesse put in the courtyard in the sanctuary four statues that represented himself as door-sign.

The Libyan sovereigns of the XXII dynasty elected Bubastis as their residence and in fact this dynasty that was opened by Sheshonq I is sometimes called bubastita.