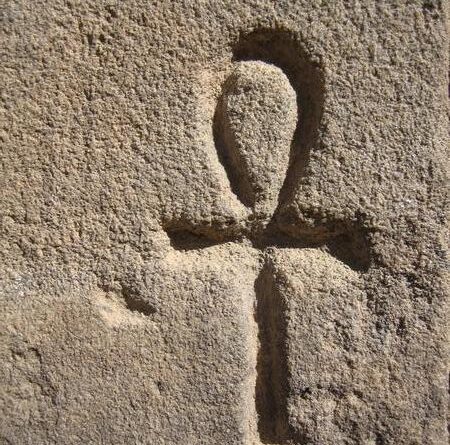 It’s a very ancient Egyptian symbol, Ankh means “life”, both as the existence on earth as the eternal one.

On the Egyptian bas-relief it often appears in the god‘s hand.

Even the pharaohs, for their human and divine nature, are often associated to this symbol: referred to the pharaohs, Ankh means both the life received (by the gods), as the power to give life (to the people).

It seems that in the ancient dynastic period (3100-2755 BC) the ring in the symbol is attributed to Isis, the goddess of maternity and fertility, and the pole under Osiride, god of male power and god of the dead: the union of female and male principle generates life.

Another interpretation identifies the ring with the eternal life and the cross with the existence on earth.

Finally, Ankh was sometimes calles “the key of life”, because thanks to it the dead could go to eternal life.

The symbol or hieroglyphic had a great fortune: in the I-II century AC it was used by Coptic Christians, that changed it in their own cross ( crux ansata)